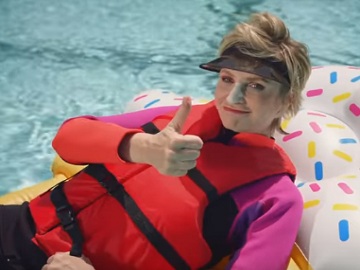 Jane Lynch stars in a new ad campaign for Mastercard, highlighting that Masterpass helps you to save time and
hassle at checkout whether shopping online, in apps, or in stores.

The American actress, best known for her role as cheerleading coach Sue Sylvester on Fox’s musical comedy-drama series Glee, recommends Masterpass and explains that it enables users to order their coffee ahead using the Dunkin’ Donuts App, then speed past the line and get where they need to be “in time to save the day”.

The 30-second spot titled “Late Lifeguard” features a lifeguard who’s trying to unlock the access gate to the swimming pool as soon as possible given the fact that, behind him, a bunch of kids are looking at him with angry faces, waiting quite impatiently. “Well, this smells like sunscreen and frustration.” – says Jane Lynch, who shows up wearing a floral print shirt and a visor. The lifeguard reveals that he’s late because he had to get his coffee and she tells him to use Masterpass next time. “Add value, order your coffee ahead, speed pass the line and open the pool on time” – says Lynch, showing him on a smartphone how easy it is.

The spot ends with the kids swimming in the pool, while the lifeguard watches them from his chair, with his coffee in his hand. Lynch, laid on a donut-shaped floating pool, says the campaign tagline, “Winning the morning – Priceless. Don’t just buy it. MasterPass It”.