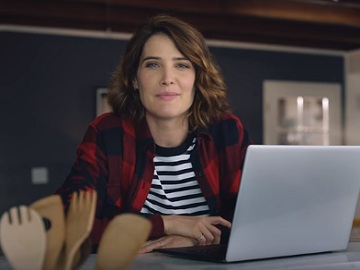 In the three spots released so far, The How I Met Your Mother star shows people how she spends the time saved paying for various things with Masterpass being something else besides Cobie the actor, as she is known. Thus, viewers get the chance to see Cobie as a proud Canadian, as a friend, and as a thespian.

“You may know me as Cobie Smoulders, the actor, but I’m going to spend the six minutes I saved paying for a flight home to Vancouver with Masterpass being… Cobie Smoulders, the proud Canadian.” – the actress says after having booked a flight from Los Angeles to Vancouver. She then shows viewers her “little slice of home” in LA, her “Canadian She Shed”, which is a very small shed in her backyard, where she can enjoy all kind of traditional Canadian products, such as fries topped with gravy, in a comfortable chair, under a picture featuring the text “Keep calm and poutine on”. This is not all, she also has snow falling down on her from a sort of improvised system and a TV to watch her favorite sports.

The campaign, created by McCann Canada in collaboration with director Dan Opsal of The Tonight Show and Canadian writer Anne T. Donahue, will be promoted through earned media on Smulders’ own social channels and as a paid media buy on social running into the new year.