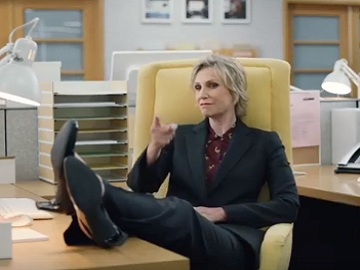 One of the 15-second spots, titled “Office Chaos”, features an IT worker who wasn’t in the office to fix a meltdown because she had to wait in line to get her coffee from Dunkin’ Donuts. A coworker, played by American actress, singer, and comedian Jane Lynch, advises her to use Masterpass next time, mentioning that she will be able to order ahead in the Dunkin’ Donuts app, speed past the line, and get at the office “in time to save the day”.

“Winning the morning – Priceless” – says Lynch at the end of the spot, who serves also as a voiceover, adding the brand’s tagline, “Don’t Just Buy It. MasterPass It”.