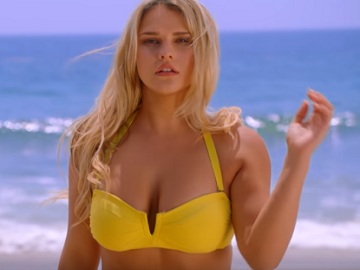 Magilla, the search engine for loans that connects borrowers to banks without requesting personal information, promotes its services in a hilarious new ad.

The 30-second spot begins with a young blonde woman walking on the beach towards the camera, showing off
her curves and big boobs in a yellow two-piece swimsuit. A middle-aged gray-haired man apparently looking at her says: “No way. Are those real? There’s no way those are real!”. At this point, the filming angle changes and we get to see that he’s holding a smartphone in his hand and his wife, who’s sitting next to him, believing that he’s lusting after the girl’s boobs, makes him stop with his question about how real “those” are. At this point, he mentions that he’s refinancing the home on MagillaLoans.com and that he just got seven offers from FDIC-insured banks in less than 24 hours. “There’s no way those rates are real!” – he adds, whilst the blonde woman gets closer to them, saying that “they’re real” and adding “This is Magilla” before turning around and leaving.

The spot ends with the man’s wife telling him to keep his eyes to the phone and with Magilla’s tagline, “Your Search Engine For Loans – Commercial Residential Whatever”.