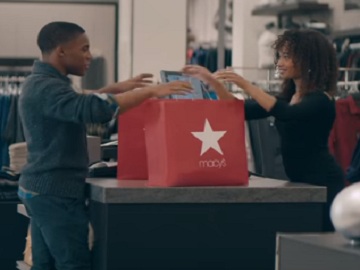 Macy’s tells a modern love story in one of the ads included in its 2017 holiday campaign, titled “Macy’s Perfect Gift”, about a teenager whose not-do-perfect Christmas gift proves to be just what he needed in order to get closer to his crush.

The 30-second spot, titled “The Wrong Size”, begins with a teenage boy shopping at Macy’s with his mother. Well, actually, he’s more into staring at the beautiful girl at the cash register instead of looking through the clothing items. His mother notices that and, on the way back home, in the car, she received the confirmation the respective girl studies at his school.

On Christmas morning, when everyone unwraps their gifts, the protagonist has a surprise: none of his clothes, nor the shoes are his size. His mother suggests him to go back at the store and exchange them and this is what he does.

The end of the commercial sees the teenager face to face with his crush, telling her he’ll see her Saturday.

The department store chain also highlights that over 150 million holiday wishes are granted every year and that “the perfect gift brings people together”.