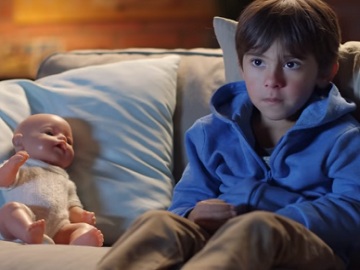 Lysol promotes its Disinfectant Spray & Wipes in a new ad, aiming to highlight that Lysol kills over 100 illnes-causing germs and viruses, even those that may cause runny noses.

The 15-second spot, titled “That’s Not a Tissue Protection”, features a boy wiping his nose with his hands and then
“cleaning” his hands on his sister’s doll, which is near him on the couch. “And… that’s not a tissue.” – the voiceover says, while the kid’s mother is seen taking the doll from the couch after noticing what he had done.

“Lysol kills over 100 illness-causing germs and viruses, even those that may cause runny noses.” – the voiceover also says, adding the brand’s tagline, “What it takes to protect”.

The ad also specifies that the Lysol Disinfectant Spray kills germs on hard surfaces, when used as directed and that it is not for use on the body.