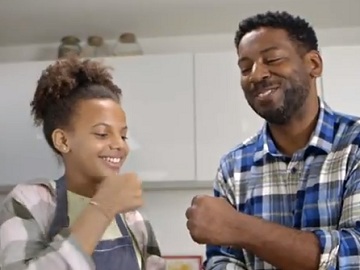 Lloyds Bank has launched a new ad campaign, titled “Dreams in 15”, to promote its remortgage services that include
information in just 15 minutes on the amount of money you could borrow.

One of the spots, titled “From cramped to revamped”, features a man who got his dream kitchen through remortgaging. He and his young daughter are sharing their story and talk about how this purchase has changed their lives. The girl says that, before, her dad was “really moody”, “stressful”, and “so cramped” because they were squished. The man, named Mark, shows picture of the kitchen they had before and says that he has always dreamed of having some sort of kitchen extension. Coming to the end of his mortgage term, he decided to have a look at remortgaging. He says that, within 15 minutes, he had an idea of how much he could afford to borrow.

His daughter reveals that, now, when their kitchen is revamped, he is “way better”. “He sings, laughs, he makes
his own jokes that aren’t even funny, to be honest.” – she says. Mark has the explanation for his good mood: “more
space, more light, more smiles”.

The advert ends with an onscreen line inviting viewers to get an idea of how much they could borrow by using the bank’s online tools and calculators.

Lloyds specifies that 15 minutes refers to using its online calculator and completing an agreement in principle and mentions that you need to make a full mortgage application to confirm the amount you can borrow.