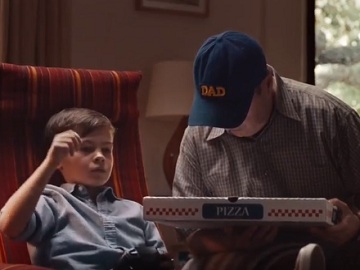 Little Caesars has launched a new commercial, promoting its deal on ExtraMostBestest pizza, which is now $6 (plus tax at participating locations).

The 30-second spot, dubbed “Number #1 Dad”, features a dad with a pizza box in his hands, telling his young son, who’s sitting in an armchair, that he got a great deal on pizza. When the boy says that Little Caesars ExtraMostBestest pizza, with the most cheese & pepperoni, costs just $6, the smile on the man’s face vanishes and he admits that he had a “terrible deal” on pizza. Disappointed, his son asks him to bow his head, covered with a “#1 Dad” hat, takes the “#1” off it and throws it away.

“Get the most cheese and most pepperoni at the nation’s best price. Little Caesars $6 ExtraMostBestest Pizza.” – the voiceover says at the end of the spot.

The pizza restaurant chain mentions that the claim of “Most Cheese & Most Pepperoni at the Nation’s Best Price” is based on comparison of the following pizzas for the top four national pizza chains – Little Caesars EXTRAMOSTBESTEST pizza and the other three pizza chains’ large round standard menu 1-topping pepperoni pizza, sold at every day menu prices.