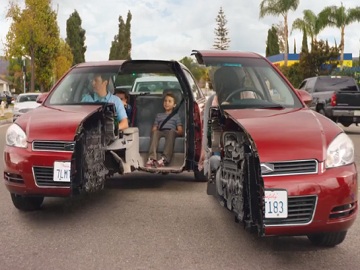 The 30-second spot, titled “Car”, features a family of four in a car, with the mother at the wheel, stopping near two pizza restaurants, one of which is Little Caesars, and expressing her options. “Hmm, I could get the ExtraMostBestest, with the most cheese and the most pepperoni for six bucks or I could get a pizza with less toppings for more money.” – she says out loud, trying to decide where to go. Her little daughter, who’s in her car seat, with her own wheel in front of her, has already made up her mind (Little Caesars, obviously) and takes the rest of the family with her. Her mom is left right there, in her part of the car, but not for long. They soon come back with a pizza box containing the ExtraMostBestest, and the girl honks her horn to announce their arrival.

The commercial ends with the voiceover urging you to “Get the most cheese and most pepperoni for the nation’s best price, Little Caesars Large $6 ExtraMostBestest Pizza”.

The pizza chain known for its $5 HOT-N-READY pepperoni pizza and famed Crazy Bread, introduced the $6 ExtraMostBestest pizza earlier this year, in May, and has launched, since then, several commercials inviting people to go and grab one. All the brand’s spots also specify that the claim of “Most Cheese & Most Pepperoni at the Nation’s Best Price” is based on comparison of Little Caesars EXTRAMOSTBESTEST Pizza and the other three national pizza chains’ large round standard menu 1-topping pepperoni pizza, sold at every day menu prices.