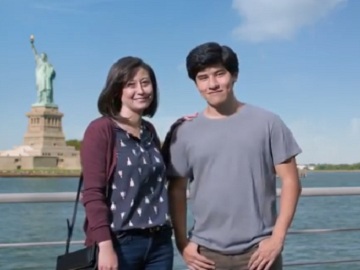 The ad also features a teenager stranded with a friend somewhere, at night, after his car had a flat tire, as well, having a phone conversation with his dad and interacting with the lady talking about Liberty Mutual. With reference to the insurance company’s Roadside Assistance, the boy reveals that his dad says their insurance doesn’t have that. He is also shown telling his father that he knows what a lug wrench is, but he actually doesn’t and when he asks his mate, receives a “Maybe” in response.

The spot ends with the voiceover saying that “You can leave your worry behind when Liberty stands with you” and adding the company’s tagline, “Liberty Stands With You”.