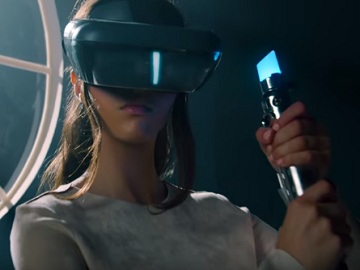 The 30-second spot features a teenage girl using the Augmented Reality Lightsaber and the Lightsaber Controller, similar to the one wielded in the Star Wars films by Anakin Skywalker, Luke Skywalker, and Rey, to outwit her opponents in Holochess, the ultimate game of concentration and strategy. She is shown directing her holographic alien pieces across the board as she battles for territory on checkered game table.

Players can also command Rebel forces against the evil Empire in large scale ground wars, and outwit their opponents in Holochess.