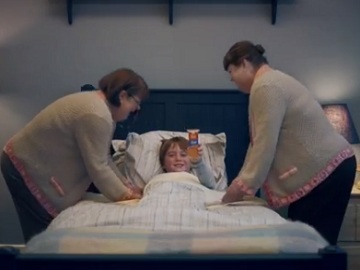 Lance UK aims to highlight, in a new ad, that its peanut butter crackers are the world’s best sandwich.

The spot, done by agency Barton F. Graf and entitled “Grandma Sandwich”, features a boy being tucked in by his grandmothers, who are standing near his bed, one on one side and the other on the other side.

“This is the second best sandwich of my life.” – the kid says and then, after taking out a pack of Lance’s crackers, adds “Lance’s Real Peanut Butter between two cheesy crackers is first best”.

At this point, the two ladies are kissing the boy on the head and say “I love you” at the same time.

The spot ends with the child voiceover inviting you to pick up some tasty sandwich crackers from Lance, whose
tagline, “This is how we sandwich”, appears on screen, as well.