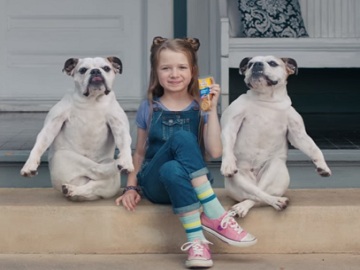 The 15-second spot, dubbed “Dog Sandwich”, features a little girl sitting on the porch between two bulldogs, and asking, while looking at the camera, “Is this the world’s best sandwich?”. “Nope.” – she says, adding that “Lance’s real peanut butter between two toasted crackers is the best”. She’s then crossing one leg after the other and the funny thing is that the dogs are doing the very same thing.

The spot ends with the child voiceover inviting you to pick up some tasty sandwich crackers from Lance.