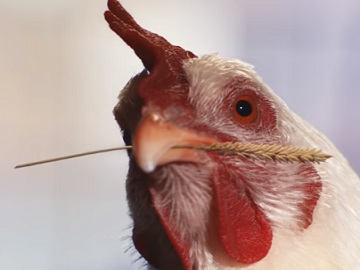 KFC UK has launched a new TV advert, titled “The Whole Chicken”, aiming to highlight that the brand’s outlets only
use fresh, locally sourced chicken, every day.

The 60-second spot, marking the first work of the fast-food chain’s newly appointed creative agency, Mother, which won the account in March (ending KFC’s 15-relationship with BBH London), features a real strutting chicken that seems to dance around a barn to the rhythms of the 2003 song “X Gon’ Give It To Ya” by American rapper DMX.

The ad, shot entirely on camera over the course of two weeks and introducing the tagline “The chicken, the whole chicken and nothing but the chicken”, aired on July 16, during The Handmaid’s Tale on Channel 4.

The campaign is supported by out of home, through a mural in London’s Shoreditch, which will be repainted each day by graffiti artists, PR, social media and in store.

DMX’s “X Gon’ Give It to Ya” was released as the lead single from the soundtrack Cradle 2 the Grave and also appeared as a hidden track on his greatest hits album, The Definition of X: The Pick of the Litter.