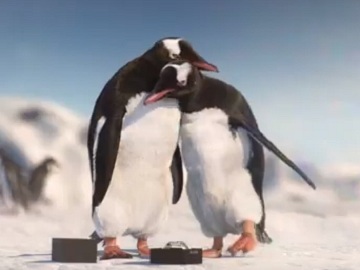 Kay Jewelers has launched a series of new ads to give men ideas on what they could give their dear ones this Christmas.

One of them, promoting Bulova watches, features a penguin giving his better half a Bulova watch. “A typical male penguin shows his love by offering the female a pebble.” – a male voiceover says at the beginning of the spot, while on screen a female penguin is seen turning around and leave after a male penguin puts a pebble at her feet.

The voiceover adds that “Some male penguins, however, are a little smarter than others.” and a penguin giving a Bulova watch is seen. He and his dear one are then seen cuddling, with the female being delighted by the gift.

“This Christmas, everyone loves a gift from Kay Jewelers. Right now, save 25% on any Bulova watch. Including this one you can find only at Kay, the number one jewelry store in America.” – a female voiceover says at the end of the spot, with the male voiceover adding “And, apparently, Antarctica.” The retailer’s tagline, “Every kiss begins with Kay”, also appears on screen.