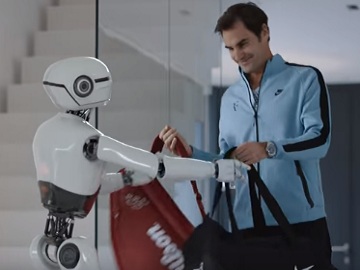 Roger Federer stars in a new commercial for the Swiss developer and distributor of home appliances Jura, endorsing
its Jura S8 coffee machine.

The 30-second spot features the tennis legend using a high-tech robot to help him around the house for various tasks, including dusting, putting away his sport gear and tennis racquets. When the mechanical domestic servant tries to offer him a coffee from a capsule, Federer isn’t too happy about it and hits it in the head with a tennis ball. Not randomly, of course, but during a spontaneous practice session, using a chopping board as a tennis racket. Afterwards, he indulges himself with a latte machiatto made by Jura S8.

“Freshly ground, not capsuled. The extraction process delivers perfect specialty coffees.” – the voiceover says at the end of the spot.

Federer has been a brand ambassador for Jura since 2006 and starred in several campaigns, promoting various coffee machines, one of them retailed for $3600. In 2015, the company announced that the tennis champion will continue to act as its brand ambassador until at least 2020.