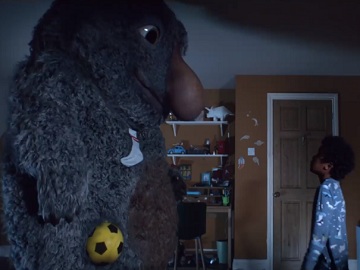 The 2017 John Lewis Christmas ad has been finally released. The spot, created by the department store chain’s long-term agency Adam&Eve, tells the story of the unlikely friendship between a young boy and a monster living under his bed.

Set to the rhythms of a cover version of The Beatles’ 1969 single “Golden Slumbers”, recorded by rock band Elbow specifically for this campaign, the ad shows how the kid, named Joe, and the 7 foot-tall cuddly monster, named Moz, become friends and spend their nights playing together, affecting Joe’s activities during the day. He is seen falling asleep in unexpected moments, even while playing with Moz, which makes the latter realize the impact the lack of a good night’s sleep has on his little friend.

For Christmas, Joe receives a night light that helps him to fall asleep at night and make the monster under the bed
disappear.

The advert has been directed by Academy Award-winner screenwriter Michel Gondry and was shot in London with twin brothers playing Joe in different scenes. It will debut on TV today (Friday, November 10) around 9.30pm on Channel 4, during Gogglebox, and will also run on all of Sky’s channels.

Moz the Monster will be found on the shelves as a cuddly toy, alongside other “gifts that brighten their world”, such as mugs and children’s clothes.