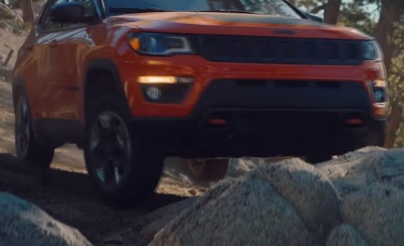 Jeep continues its ad campaign promoting the 2017 Compass with a new commercial, urging you to make your way in a Jeep Compass and get to a place no flight ever could.

The 30-second spot, titled “Missed Flight”, features a couple in a Compass Trailhawk, who, afterning, on their way to the airport, while stuck in traffic, that they missed their flight, decide to make eventually a road trip to the top of a hill, where they have the chance to enjoy an amazing view.

“Flying might be the quickest way from A to B, but it is anything but the most scenic, or the most rewarding.” – is the idea behind the ad, featuring the same female voiceover saying “Recalculating” as the couple make the decision to ride to that special place, and adding that “the destination isn’t what matters”.

The spot also highlights that this car, described as “the most capable compact SUV ever”, boasts for optimum traction purposes, the Active Drive Lock 4×4 System which features a four-wheel Low mode, rear locker and a Rock setting, besides snow, sand, and mud, on the Selec-Terrain system.

The spot ends with the tagline “Find your true north – Your all new Compass Jeep”.

The song playing in the background has been specially made for this ad and sounds quite similar to Bahamian musician Exuma’s “Baäl”, from his 1970 album “Exuma II”.