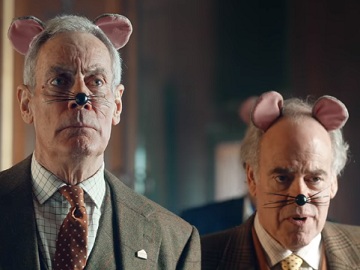 Jacob’s, a brand name for several lines of biscuits and crackers in the UK and Ireland, announces the introduction of three new members to the Mini Cheddars family in a new TV advert.

The 30-second spot, titled “Cheddar Appreciation Society”, features a gentleman with mouse ears on his head and
whiskers stuck on his nose, entering a room where members of the Cheddar Appreciation Society (who are also wearing mouse ears and whiskers) are hanging out. He takes out, from the briefcase he’s holding, three bags of Mini Cheddars in three new flavours, namely Stilton, Red Leicester and Smoked Cheddar, and gives them to his fellows, who don’t know what to do with them. “Why don’t we just try them?” – suggests one of the gentlemen, taking a sip of coffee. While some voices seem to find this a good idea, one of the gentlemen shouts “Never”, arguing that his father , his grandfather and great-grandfather wouldn’t agree. “Why don’t we ask brother Walter?” – intervenes another gentleman. At this point, brother Walter is shown sitting in an armchair and already indulging himself with the new Mini Cheddars, which causes outrage among the society members.

The spot ends with the voiceover informing that Jacob’s Mini Cheddars are now in three new cheese flavors and adding the brand’s tagline, “Choose your cheese”.