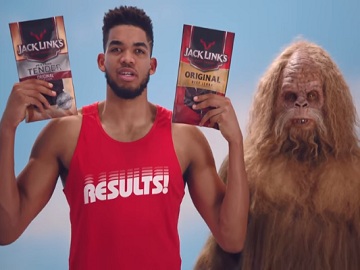 Karl-Anthony Towns works out with Sasquatch in a new campaign launched by the beef jerky maker Jack Link’s.

The Minnesota Timberwolves player co-stars with the brand’s mascot in a series of spots created by agency Carmichael Lynch, aiming to position Jack Link’s as the go-to protein snack for athletes.

As the spot ends, with the tagline “Feed your wild side”, we get to see that a raccoon was watching the two working out.

In others spots, that run on various channels, including TNT, Adult Swim and FX, as well as YouTube, Hulu and Funny or Die, Karl-Anthony Towns reveals what’s inside his gym bag, jumps over a porcupine, does weasel stretching, lifts a log and fights off beehives thrown at him.

Previous: Apple Commercial: Switch to iPhone
Next: Olay Commercial – Is it DNA or Olay?