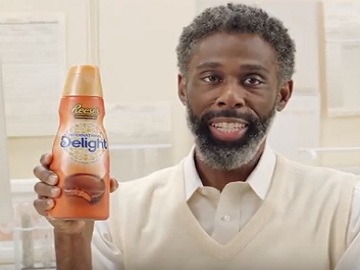 International Delight promotes the REESE’S Peanut Butter Cup Creamer in a new ad, stating that “it tastes as amazing as it sounds”.

“How do you like your coffee?” – is the question raised at the beginning of the 15-second spot. A man sitting at a desk, in his office, reveals that people used to think he is crazy for putting REESE’S Peanut Butter Cups in his coffee. “Well, who’s crazy now?” – he asks holding a bottle of REESE’S Peanut Butter Cup Creamer in his hand and calling then his colleague Chip, who stands up to be seen for an instant.
“I like International and I expect to be delighted.” – the man adds at the end of the commercial, which also shows the tagline “We like how you party”.

Reese’s Peanut Butter Cup Coffee Creamer, the creamy coffee additive that makes caffeinated drinks taste like the peanut butter cups, hit shelves nationwide at the end of August, Walmart being among the retailers that sell it.