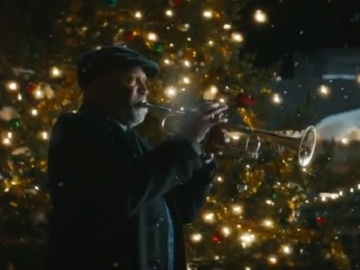 Interac Brand pulls at people’s heartstrings with its 2017 Christmas ad, telling the heartwarming story of a musician who receives an unexpected surprise from those who enjoyed his show over the course of time.

The spot, titled “The Musician”, features the man, named Maurice Robinson, playing the trumpet in various places without receiving any money because almost everyone pays for their purchases or orders with their contactless cards or contactless-enabled devices.

Realizing that people don’t use to carry cash anymore, he comes up with the idea to use INTERAC e-Transfer so that
they could send money easily, if they want to, without sharing any financial information, and he could receive it
easily, as well.

Finally, the artist is seen on the night of Christmas Eve being surrounded by all those who enjoyed his “show” before but weren’t able to show their appreciation at the time because they didn’t have any coin or bancnote. However, it turns out that they did show their appreciation after all by transfering money into his account while he was performing.

The music playing in the background is the song “Put a Little Love in Your Heart”, originally performed in 1969 by
Jackie DeShannon. A version of this song, recorded in 1988 by Annie Lennox and Al Green, was used as the ending
theme song to the 1988 film “Scrooged”.

According to Interac, Interac e-Transfer is “one of the fastest and safest ways to send, request, and receive
money”, all you need being access to online or mobile banking. You can then transfer money to anyone with an email
address or mobile number and bank account in Canada.