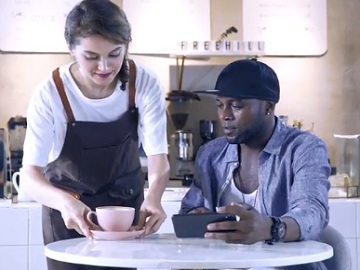 Infinix promotes the HOT 5 in a series of new ads, showcasing some of its most important features.

One of the spots, titled “My Mobile Cinema”, shows a guy in a coffee shop, taking out his HOT5 while waiting for his order to be served, and watching a clip. As he pressed the “Play”button, he is transported into a movie theatre (an empty one), where he keeps watching the respective clip with a box of popcorn in his hands. When a hand touches him on the shoulder, he turn back to reality, in the coffee shop, where the waitress is bringing his cappuccino.

Looking around him for a few moments, he sees other persons looking into their phones, as well, so he decide to keep watching the movie.

“It’s not just a smartphone. It’s my mobile cinema.” – the guy says at the end of the spot, showing off his smartphone. The ad also highlights that Infinix HOT 5, which was unveiled earlier this year, in March, features Dirac 3D, Stereo Surrounding, and 4000mAh battery.