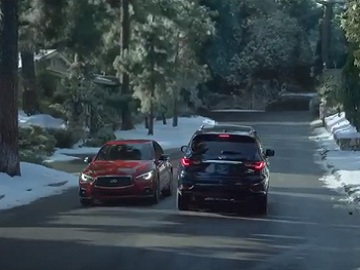 Infiniti USA promotes its “Start Your Own Legacy” Winter Sales Event, offering exceptional deals on the brand’s full line up through 1/2/18, with a new commercial.

The protagonists are a man and his wife, both driving Infiniti vehicles, who made the long way their usual way. The two are seen meeting each other in a peaceful neighborhood and having a short conversation, each staying in their own car.

The 30-second spot, dubbed “Long Way”, ends with the voiceover urging you to visit your Infiniti retailer for leases starting at $289/month during the Start You Own Legacy Winter Sales Event.