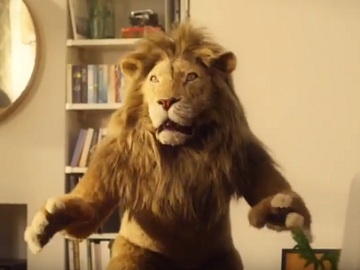 IKEA UK has released a new ad, aiming to highlight that, in order to achieve great things, we need to fully recharge our minds and bodies, and urging viewers to “relax into greatness”.

The spot, part of the retailer’s Wonderful Everyday campaign, is directed by Chris Barrat and Luke Taylor, and begins with a lion sitting on a couch, in a living room. “Did you know that lion spends more than 18 hours a day relaxing? But if you think they are lazy, look again. Because they’re just waiting for the right moment.” – says the voiceover, while on screen the lion man is shown watching TV, reading a book, indulging himself with a smoothie, and doing some stretching on the terrace.

“And when their minds and bodies are fully recharged, then it’s time for action.” – adds the voiceover, at the end of the ad, featuring a group of kids taking the living room by storm and starting to play with the lion man, who serves as a horse to be ridden by one of the little girls.

The music playing in the background is “By The Sleepy Lagoon” by Eric Coates with an additional production by Paul Sumpter.