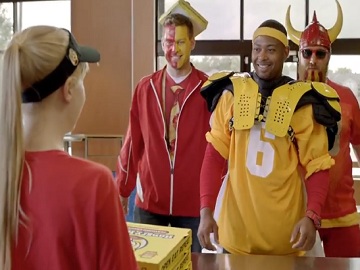 Hungry Howie highlights, in a new ad, that the dough used it its pizzas is made fresh daily, with 100% real mozzarella, and promotes its offer on 3 Cheeser Howie Bread, that can be purchased for 99 cents with a $12 minimum order.

The spot features three football fans entering a Hungry Howie’s restaurant to get their order – some Howie’s specials with Cajun crust. Seeing them dressed as if they’re ready to hit the stadium to watch their favorite team, the girl handing them over the pizza boxes asks them where is the game. One of them tells her “there’s no game” and she soon realizes there is no game indeed as the guys don’t leave anywhere. Instead, they are taking out all kind of noisy instruments to wreck havoc inside the restaurant, making her phone conversations with customers almost impossible. “These guys again?” – one of the girl’s colleagues asks rhetorically, seeing them there. When he says relieved that “at least, they don’t have an air horn”, one of the tailgaters starts using one.

The commercial ends with the voiceover saying that flavor fanatics love Hungry Howie’s Pizza because they make their dough fresh daily and only use 100% real mozzarella, and urging viewers to order online to get a 3 Cheeser Howie Bread for 99 cents. He then adds the pizza chain’s tagline, “Flavor Fanatics Welcome”, but what he doesn’t mention is what a small onscreen line informs, namely that this offer is valid with a $12 minimum order.