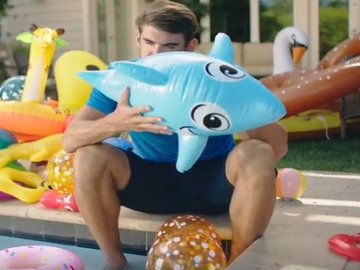 The former competitive swimmer (and most decorated Olympian of all time), who announced, at the end of last month, in another ad for the brand of disposable diapers, that he will be training for the 2032 Summer Games “Boomer (his son) and all the babies around the world to be the best swimmers that they can be”, is featured by the pool, blowing up an inflatable dolphin-shaped pool toy, without saying a word. A pile of already blown up animal-shaped little floats can be seen behind him, with two balls and a baby buoy float falling into the water.

The first ad, titled #Trainingfor2032 Press Conference, features not only Phelps, but also his wife, Nicole, and
their 1-year-old son, Boomer, during a news conference (fake), in which he announces the partnership with Huggies “to inspire parents and babies everywhere to safely engage in more water play”. On the occasion, he also states
that “It’s never too early to introduce your babies to the water”.

Phelps was appointed, on June 5, to the board of directors of Medibio, an Australian medical technology company that has developed a test to assist in the diagnosis of depression, chronic stress and other mental health disorders. Phelps is also known for his advocacy for mental health as he has talked about his own mental health issues and helping others recognize theirs and seek the support they may need.