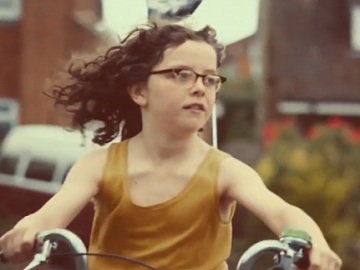 HSBC UK has teamed up with British Cycling to get two million people back on their bikes and has launched a new advert, aiming to help have a happier, healthier, greener Britain.

“You were just like me or have you forgotten?” – asks a young boy riding a bike at the beginning of the 60-second spot, titled “Life Cycle”. “Feeling the wind in your hair, skidding on gravel, gliding through puddles. The times the wind forced you to shut your eyes. That feeling of being unstoppable.” – adds the boy, while on screen various persons, from kids to adults, are shown riding bikes and enjoying every single moment.

“What’s what they say? That’s just riding a bike. That you never forget. While it seems you did.” – says the boy at the end of the ad.

HSBC UK, that became the lead partner of British Cycling on January 1, 2017, will organise, throughout the year, various rides, such as HSBC UK City Ride, Breeze, Ride Social, Guided Rides, and Go–Ride, that will appeal to all kinds of cyclists, from lapsed to enthusiasts and beginners. Over the next eight years, HSBC and British Cycling will invite families to experience (again) the joys and benefits of getting on a bike.