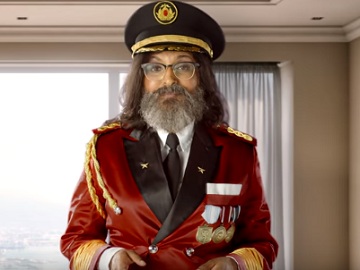 The travel site Hotels.com introduces the temporary replacement for its spokesperson, the famous Captain Obvious, selected following the “Temp Captain Contest”, in a series of new commercials.

One of them, titled “The Temporary Captain’s Morning”, aims to highlight how rewardy the Hotels.com Reward Program is by featuring the Temporary Captain ordering some very special room service. “Waking up in a beautiful boutique hotel is very rewarding. Especially if you’re a temporary Captain Obvious.” – the Captain, who is in a hotel room, says, taking off the fluffy bathrobe he’s wearing. He then adds that the Hotels.com Rewards Program, that enables members to get instant savings and earn free nights for later, is “even rewardier”, and reveals that he just rewarded himself with room service and ordered puppies.

The spot ends with the Temporary Captain starting to play with a puppy and telling him that he’s “permanenty adorable”.

The Temporary Captain Obvious, portrayed by several persons, was chosed from the entrants to the social contest organized by Hotels.com and agency J. Walter Thompson Canada, who filmed a 30-second audition tape explaining why they should be the next Captain. The winners have been rewarded by the travel site also with a $1000 gift card.