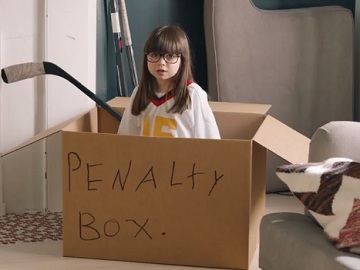 Hotels.com has launched a new ad to promotes its services and highlight that you can unlock instant savings now and earn free nights to use later.

The 30-second spot, titled “House Broken”, features a dad who, after hearing all kind of strange noises coming from the living room, goes downstairs to see what happens and finds his kids playing hockey on the floor. While his son is hitting pucks, his little daughter is sitting in a cardboard box named “Penalty Box”. When he’s asking them where mom is, his older daughter shows up unexpectedly, dressed in a hockey uniform, and knocks him down. “You gotta keep your head up.” – tells him the youngest kid, right before Captain Obvious appears to drop some “news”: “Do you know who doesn’t get hit from behind? Tennis dads.” “Ah, thanks, Captain Obvious.” – answers the injured dad.

“Being a hockey parent isn’t always rewarding, but Hotels.com is.” – adds Captain Obvious. The spot ends with the voiceover urging viewers to unlock instant savings now and earn free nights to use later.