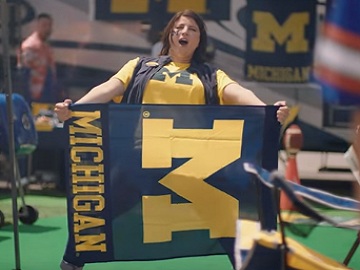 Hotels.com has launched a new commercial to promote its Rewards program, that allows you to collect nights wherever you go and get free nights at over 213,000 properties anytime, anywhere.

The spot, titled “Glory Days”, features a dad and his two kids (a teenage girl and a pre-teenage boy) ready to watch “the big game”. Judging by the accessories they’re wearing, they are fans of Florida Gators, unlike the mom, who’s living her glory days as a cheerleader for the Michigan Wolverines. “Boy, I wish your mom was here. Instead of over there.” – the man tells his children, adding then, after seeing his wife “in action”, “She needs this, kids. Mom needs this”.

While the woman is trying to do a split, Captain Obvious shows up saying that “Reliving the glory days isn’t always rewarding. But Hotels.com is.” and urging viewers to “unlock instant savings now and earn free nights to use later”.

The website’s Rewards program enables its members to collect nights wherever they go, at over 297.000 properties around the world, and to redeem one free night for every 10 nights collected, whether it’s a single stay or multiple trips.