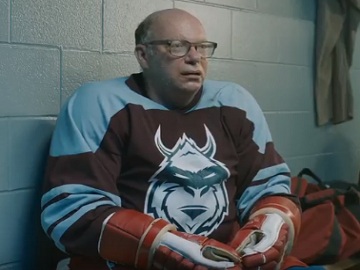 The 30-second spot, titled “Beer League”, features a hockey team consisting of former players, now middle-aged, trying to deal with their loss, in the locker room. “Good job, boys.” – one of them says, while another one is seen controlling his asthma. A third man, with sweat dripping down his face, is trying to motivate his teammates by saying “Only few more periods to go.”, but they are clearly at a bit of a low ebb as they are starting to cry. At this point, Captain Obvious shows up saying “The glory days are over.” “Thanks, Captain Obvious!” – the men answer all at once.

“Hockey with the boys isn’t always rewarding, but Hotels.com is.” – Captain Obvious adds at the end of the spot and the voiceover urges viewers to “Unlock instant savings now and earn free nights to use later”.