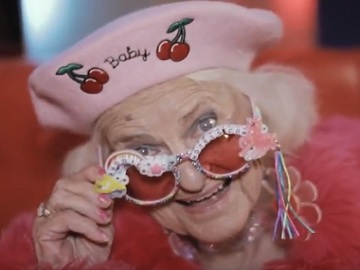 Hotels.com has challenged the insta famous great-grandmother Baddie Winkle to tick off her ultimate #BadAssBucketList and released a video featuring her adventures.

The 89-year-old lady, who became an Internet sensation at the age of 85, has embarked on a journey that included chasing waterfalls in Niagara, shaking up a storm in New York City, scoring a touchdown in Dallas, flying the sky high over the Grand Canyon, getting cheeky with the boys in Brazil, dancing samba in Rio, doing high kicks at the Moulin Rouge, in Paris, dancing in Dublin, snagging a prince in London and going big in Soho, where she served as a DJ in a club.

Photos and videos from her amazing trip, featuring Baddie dressed in eccentric outfits doing all the above mentioned activities are shown, reminding us that age is only a number and that is never too late to start your own adventure.

The spot is also part of the website campaign promoting the Hotels.com Rewards Program, that allows its members to stay 10 nights and get 1 free.