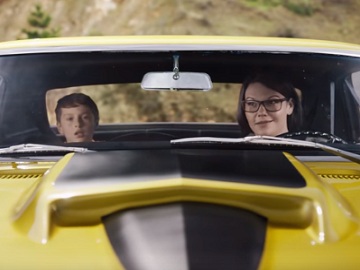 Hot Wheels has launched a new ad campaign titled “Challenge Accepted”, aiming to point out that “Hot Wheels is more than just a toy” and that “It’s a tool that helps kids develop life skills”, as “every car they race and every obstacle they jump teaches them to take on anything”.

One of the spots, titled “The Drive”, promoting the Track Builder Stunt Bridge, features a young boy and his mother on a pulse-racing ride with a car they chose from a variety of vehicles. During the drive, his mom, who’s driving like a pro and performs a series of stunts, also shares some words of wisdom with him. “It’s ok, we’ll find another way to keep going, it’s all in the way you look at it.”, “When the unexpected happens, you got to find a way through it.” – she tells her son. When they arrive in front of an unfinished bridge, he says it “looks too big”. “Maybe we shouldn’t try it.” – she says only to see what the kid’s reaction will be.

When he suggests they should try it, she speeds down the road, but they don’t make it.

As the spot comes to its end, it is revealed that the mother and son are actually playing with Hot Wheels cars on the Track Builder Stunt Bridge, and that they decide to try again, “with the right car this time”. “When kids take on challenges, there’s no limit to how far they’ll go.” – the voiceover says.

The brand of die-cast toy cars states that the stunts they create when they build and re-configure tracks and bricks will boost the kids’ problem solving skills. Among the other toys that help children develop various skills there are the Super Ultimate Garage, the Roto Revolution, and the AI Starter Kit.