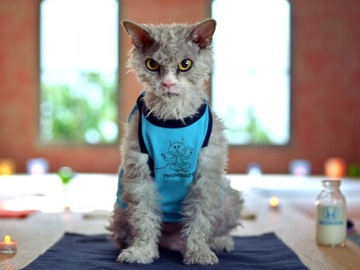 Honda highlights the importance of getting your Honda vehicle serviced at an authorized Honda Service Center, with expert technicians who use genuine Honda parts, in a new commercial starring the internet sensation Pompous Albert.

The 30-second spot features the frowning feline, named after Albert Einstein (due to his wild grey fur) and that has become an Instagram star thanks to his permanent scowl, about whom we learn that despises early morning yoga, loathes unpaid internships, detests ’80s night, and isn’t amused by unskilled mechanics. The voiceover reveals that unskilled mechanics, who almost kill him by dropping car parts in his head, are the reason why he takes his Honda vehicle to an authorized Honda Service Center, with factory trained technicians in genuine Honda parts. “So Pompous Albert is a little less pompous” – adds the voiceover, while on screen the cat is shown being pet by a Honda mechanic.

Albert, a Selkirk Rex cat from Salt Lake City, is a constant source of entertainment for his thousands of followers on his social media accounts, which are run run by his owners Mike and Susan Singleton.