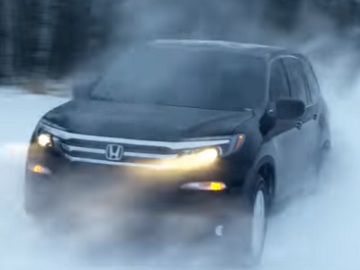 Honda has released a new commercial to show you how the 2017 All-Wheel-Drive Honda Pilot LX takes on the vicious winter weather conditions in Baudette, Minnesota.

“We go a long way to see how the All-Wheel Drive Honda Pilot will perform under increasingly harsh winter conditions.” – the voiceover says at the beginning of the 30-second spot, titled “Ends of the Earth”, featuring the SUV in Baudette, Minnesota, being driven on snow and completely covered in ice. “When we tested in Baudette, Minnesota, we pushed the Pilot to the absolute limit to make sure it could handle the freezing temps and brutal terrain. Why do we go to the ends of earth to find these answers? Because you do. An SUV engineered to perform almost anywhere. So you can, too.” – the voiceover adds.