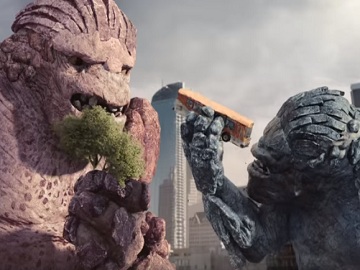 “If you’re a parent, you know sometimes your kids can be little monsters. Thankfully, there are plenty of ways to keep the peace in the all-new Honda Odyssey” – this is the idea behind the latest commercial released by Honda to showcase some of its features that are really helpful for those who travel often with children.

The 60-second spot, titled “Keep the Peace”, features two giant monsters stomping through a city, wrecking everything on their way and fighting over a bus. As they battle over it, pushing and hitting each other, two soldiers (a man and a woman) appear from behind a street corner and, at the shelter of an upturned car, hatch rapidly a plan on how to separate the creatures. Thus, while he starts yelling at the monsters, using a megaphone, asking them to stop the fight and drop the bus, she creates a crack in the ground that physically separates the monsters.

As the ad continues, it is revealed that this was a methafor to illustrate the kids’ fights in the backseat and Honda Odyssey’s smart features that parents can use to make them stop, such as slide seats, cabin talk, enabling the driver to speak to speakers and/or headphones to make sure he’s heard, and cabin watch, enabling the driver and the passenger from the front seat to see what the kids are doing in the back.

The spot ends with the voiceover saying that “there are plenty of ways to keep the peace”.

Described as “the perfect family minivan for any adventure”, the all-new Honda Odyssey boasts an intelligent suite of safety and driver-assistive technologies (named Honda Sensing) designed to help drivers in various situations. Some of these technologies are the Lane Keeping Assist System, the Collision Mitigation Braking System, the Adaptive Cruise Control and the Road Departure Mitigation System.