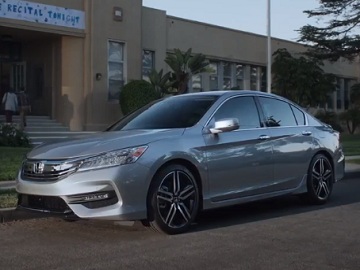 Honda showcases the 2017 Honda Accord in a new commercial, highlighting that this car comes with all the right tools to help you tackle any mission, like a standard text message reader, Bluetooth, and a rearview camera.

The 30-second spot, dubbed “Excitement Comes Standard”, features a man in a dark suit, getting in a Honda Accord and looking at the black leather bag in the back seat before hitting the road. Actually, before hitting the road he’s also checking the latest email received from “The Boss” (thanks to the Standard Text Message Reader), which gives him information about the time and the place he must go to (most probably to deliver the bag). So, learning that at 6pm he must be at “the front entrance”, he speeds down the road to arrive in time.

On his way, he receives a phone call, but the person calling doesn’t get to say a word, because he calms her down. “Relax, I’ll be right there.” – the man says using the Bluetooth function and keeping his focus on the road.

As the spot comes to its end, it is revealed that the mysterious man, who’s using the standard rearview camera to check his surroundings at the destination, is actually a dad bringing to his young daughter her tulle skirt, needed for her ballet practice.