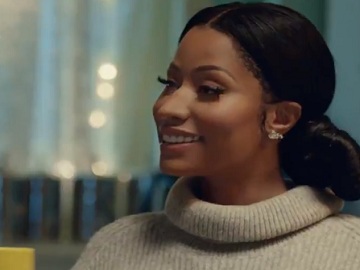 H&M has released a teaser for its 2017 Holiday campaign film, revealing that the cast ensemble includes Nicki Minaj, Jesse Williams and John Turturro.

According to the Swedish clothing-retail company, the film, directed by Johan Renck, “tells a story of a parallel fantasy world filled with memorable characters and a universal message of caring for one another.” The 10-second teaser features Jesse Williams and Nicki Minaj as husband and wife in their kitchen, which is decorated for Christmas, with Nicki telling Jesse that their daughter wants to hear a bedtime story and that she will let him do the reading.

Next, the Grey’s Anatomy star is seen in a chair, by the girl’s bed, starting a story with the famous line “Once upon a time”. The following shot features the kid walking through a forest and the onscreen line “A magical holiday”.

The full version of the campaign film will be released on November 28. Selected garments seen in the film, part of the Festive Season collection, will be available in stores and online, at the brand’s website, from November 9.