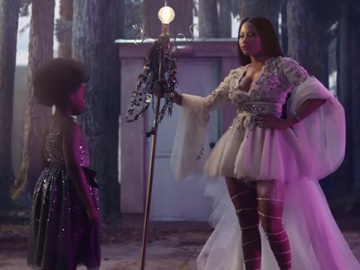 After the teaser released earlier this month for its 2017 Christmas campaign, H&M dropped today the full campaign film, titled “A Magical Holiday”.

Directed by Johan Renck, the ad features Grey’s Anatomy star Jesse Williams as a father who tells his young daughter a bedtime story about a parallel fantasy world. Sitting in a chair by the girl’s bed, the actor comes up with the tale looking at the things around him in the room and thinking about his family, as well, the protagonist of the story being a girl portrayed by his daughter. She created a tiny black hole that plunged her into a parallel universe, where the evil brother of Father Christmas was stealing people’s gifts and made everyone live in terror. She then decided to find him and teach him how to be kind. Throughout her journey, the hero girl tried to get help from a few creatures that are illustrated by her parents: her mother (Nicki Minaj) is “the wisest thingy” and her dad is “the fastest fairy in the world”, but none of them could actually do something for her. However, she managed somehow to find out where Santa’s brother lived and went to him. After she made him swear that he would never steal or destroy anyone’s Christmas gifts ever again, she came back home and sent all her Christmas gifts to the kids in the parallel universe, bringing them joy, because this was “her thing”, caring about others.

The end of the campaign film sees the girl falling asleep before hearing the end of the story and her dad givinf her a goodnight kiss.

Wishing you “Happy Giving!”, the Swedish clothing-retail company states that “Cosy knits, sparkling accessories and
pretty dresses make for the ultimate holiday look” and invites you to shop the Holiday collection in stores and online.