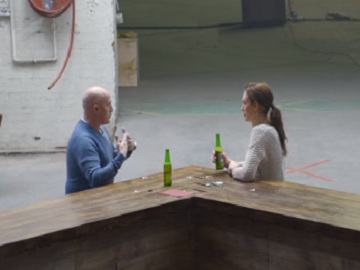 “Can two strangers with opposing views prove that there’s more that unites than divides us?” – the answer to this question is given by the result of the social experiment presented by Heineken as part of its ongoing “Open Your World” campaign.

This experiment, called “Worlds Apart” and designed to overcome barriers among people, gets pairs of strangers divided by their beliefs to assemble some flat pack furniture and then build a bar together, but also to discuss, in a Q&A part, about each other’s personalities.

The participants at the experiment are three pairs consisting of a feminist and an anti-feminist, a climate-change denier and an environmental activitist, and a transgender woman and a right-wing guy who thinks it’s “wrong”. They don’t know the other’s beliefs, acknowledging them only after working together, when they are shown a video of the other person presenting their points of view on various topics.

At the end, they are invited either to walk away or stay and discuss their differences over a beer, at the bar built by them. Even though one of them seems to head out after seeing the video of his co-worker (it was a joke), all of them decide to sit down and have a beer.

In order to enact the message of the film in real life, the brand is partnering with not-for-profit organisation The Human Library, which is actually a community of persons with extraordinary backgrounds, that can be got “on loan” for a conversation to challenge stereotypes.