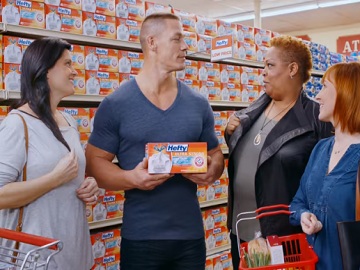 The professional wrestler’s muscles are used again as the main “ingredient” for a hilarious spot, entitled “Waiting Husbands”. Standing in the trash bag aisle and holding Hefty Ultra Strong with Arm & Hammer Odor Control bags in his hands, he says to the three ladies surrounding him that those bags are strong and a great deal. “You know, I love saving money.” – says one of them. “I also love saving money” – says another one looking shyly in his eyes. The third one, more courageous, says “I love you”.

At this point, a man uses the microphone to get the shoppers’ attention and calls for Kristy, Sarah, and Kim – the three ladies flirting with Cena, that their husbands are waiting for them upfront. While on screen, three men are shown waiting, the women tell Cena they don’t have a husband. Well, only two of them tell him this because the third one is busy smelling him.

“Get Hefty Ultra Strong with Arm & Hammer Odor Control. Costs less than Glad where sold head-to-head.” – says the voiceover, whose statement is followed by the brand’s chanted slogan at the end of the spot.