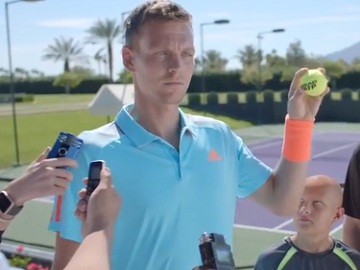 The 30-second spot, aiming to illustrate the idea that, for Berdych, instinct has no off switch, features the Czech tennis player in the Players Only locker room, dressed in a suit, being approached by two teenage boy with a ball, one of them wanting to show to his friend that Berdych can catch it almost with his eyes closed, which he does.

The ad also shows Berdych in other places, such as a living room, sitting on the couch and zapping, at the gym, at a restaurant and during an interview, catching the tennis ball thrown at him from nowhere, without blinking.

The Players Only campaign, that debuted earlier this year, in April, also features “Sascha” Alexander Zverev, who shows us how he prepares before a match with his Game Face, and Novak Djokovic, who uses the Player’s Room not only for focus and reflection, but also for dancing on the rhythms of his favorite tune.