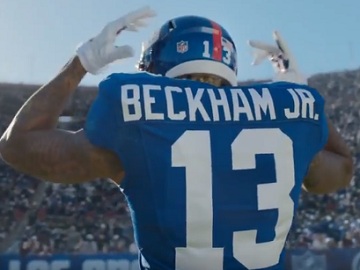 Odell Beckham Jr. stars in the latest Head & Shoulders commercial, aiming to highlight that “our shoulders carry a lot of names, but, in the end, the only name that matters is your own”.

“My shoulders carry a lot of names. Some I deserve, others I don’t.” – Odell’s voice is heard in the 30-second spot, while he is shown leaving the locker room (where he has Head & Shoulders shampoo), walking on the field and playing with jerseys carrying some of the names he talks about, such as “competitor”, “overrated”, “passionate”, “magician”, and “entertainer”. “And a few are kind of true. But in the end, the only name that matters is your own.” – the player also says and his name appears on his jersey. He also mentions that the one thing he doesn’t carry on his shoulders is dandruff “cause shoulders were made for greatness, not dandruff”.

The spot ends with the brand’s tagline, “Shoulders were made for greatness, not dandruff”.