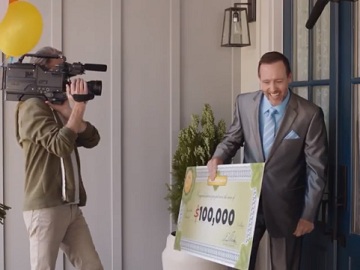 Furniture retailer Havertys highlights, in a hilarious new commercial, that you could save up to $1000 when you shop the brand’s Year End Specials now through New Year’s Day.

“Havertys furniture helps your home look perfect even when life isn’t.” – the voiceover says at the beginning of the 30-second spot, which features a man lying on his comfortable Carlson Dual Power Sofa from Havertys asking his family members to open the front door to whoever rings. “Not me, baby!” – his mother says, while doing a puzzle on the kitchen table. His son, who’s playing video games, says he’s got homework to do, and his wife, seen with a beauty mask on her face, reminds him that “it’s mommy time”. The man shouts that “It’s daddy time!”, which makes his mother say, not too loud, this time, but loud enough to make herself heard, “I told you not to marry her.” Eventually, he decides to keep lounging on the couch and the person at the door, a man who was about to hand him over a $100.000 check, decides to leave, believing that no one’s home.

The commercial ends with the voiceover urging you to find Year End Specials now at Havertys, while an onscreen line informs that you could save up to $1000 and that there is a 36-month no interest period. The sale event ends New Year’s Day.

The sofa the man starring in the ad lounges on is part of the Carlson collection, designed exclusively for Havertys by BERNHARDT. Covered in sleek, top-grain leather, the Dual Power Sofa features a lay-flat, bustle back design, with clean lines and wing arms, infinite, dual power reclining mechanism on end seats, and independently powered headrests and footrests. Its price is $2,199.99.