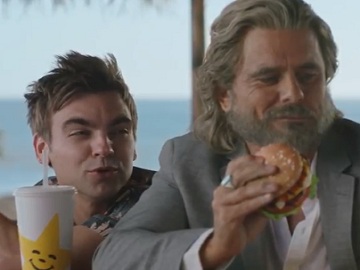 In one of the them, titled “Junior Tell A Lie”, set at a bar on the beach, where Carl Junior and Carl Senior are hanging out with a young woman, Junior tells the latter he once put his canoe in the pool. “It was crazy. It was at a party.” – Junior says, while his dad, holding a charbroiled chicken sandwich in his right hand, is obviously thinking about stopping him from continuing this tale. When Junior keeps talking, adding that “People thought it was a pretty night”, Carl Senior looks toward him and says “You didn’t do that.”. His son admits he lied, mentioning that he didn’t do that because he doesn’t have a canoe.

At the end of the spot, the three Charbroiled Chicken Sandwiches (Club, Hawaiian, and BBQ), made with “no antibiotics ever” and available for a limited time at participating restaurants, are showcased.