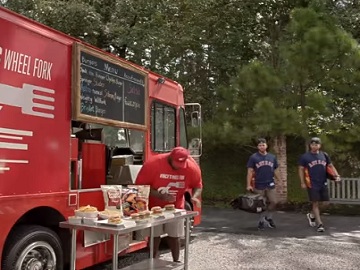 H-E-B has launched a series of new ads featuring Astros players to promote its products.

One of the spots brings back into the spotlight former NFL player Vince Wilfork as the owner of a food truck. Houston Astros outfielder George Springer, who became a spokesman for the grocery chain earlier this year, in July, and his teammate Carlos Correa, meet Vince on their way to practice and, obviously, they stop by his food truck, called “Vince’s Wheel Fork” for a chat. “Hey, guys, who wants a H-E-B Prime 1 burger and accoutrements?” – Vince asks the two potential clients, showing off his menu and Accoutrements list (which includes salsa and guacamole) written on a blackboard. He explains that he got into the “food biz” now that he’s retired and starts listing some of the burgers he’s selling, like Check the Runner Chicken Burger, Prime 1 Springer Slider, and the Astro-nomical Salmon Burger.

Asked about another burger on the menu, called “Weighty Wilfork”, Vince, happy he got the chance to “brag” about it, shows it off on a plate, mentioning it’s “all of the above”, and leaving the two players in doubt. “I don’t know, man.” – one of them says. “Exactly!” – comes Vince’s reply.

The spot ends with the voiceover informing that H-E-B burgers are “made with Prime 1 chuck in store daily”.