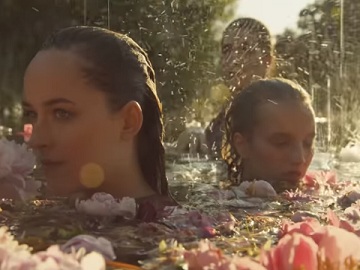 Shot by Glen Luchford in New York City, the campaign, aiming to illustrate “a surreal idea of wearing a garden”, features the gorgeous trio, wearing Gucci florals, in various places: on a sidewalk flourishing with blooms, where they’re having a tea, in a living room overgrown with verdant plants, where they’re lounging on a sofa and in an armchair, and in a lake entangled with shimmering flowers and reeds, where they swim at dusk and enjoy a summer rain.

The soundtrack music is the 2008 single “The Rip” by English band Portishead, from their third studio album, “Third”, released in 2008.

Gucci Bloom, featuring a floral blend of jasmine and tuberose and Rangoon Creeper, a unique flower discovered in South India, is currently available for purchase at $92 for a 50ml bottle and $124 for a 100ml bottle.

Dakota Johnson was announced as the face of this new fragrance earlier this year, on May 1st.