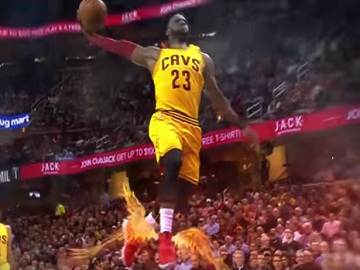 Goodyear marks the sponsorship deal reached with the Cleveland Cavaliers with a commercial that celebrates drive.

“Drive was born here. It’s in our blood. It’s who we are. It’s what we make” – says the voiceover in the 60-second black & white spot, featuring Cleveland Cavaliers’ players of all times and several iconic moments from the team’s history, including the win of the 2016 NBA Championship.

“In the land of the driven, hard work is an obsession. But when you earn your place at the top, will you polish your ring?” – asks the voiceover, continuing then his speech by saying that “drive pushes you further, lifts you higher. Because to be great, you can never act like you are right. You just keep driving”.

The spot ends with the onscreen lines “Neighbors by birth. Teammates at last”.

On May 15, when the ad was released, it was also announced that The Cleveland Cavaliers will wear a patch with the tire maker’s wingfoot logo on their jerseys starting in 2017-18. The patch will go on the left side of the jersey, opposite the logo for Nike, which takes over as the NBA’s official apparel provider next season.