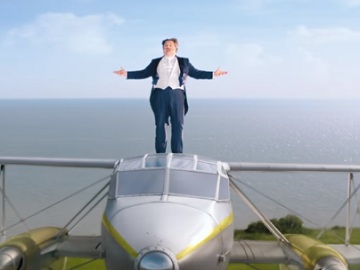 The 60-second spot, dubbed “Onwards and upwards” and aiming to tell the “true story of one man’s heroic mission to enrich all our lives”, features the Italian tenor and his troupe of dancers, violinists and choristers as they proudly fly over Britain on planes, singing and dancing and helping everyone everywhere save time and money.

The fictional Italian tenor named Gio Compario, starring in Gocompare.com’s adverts since 2009, is played by Welsh tenor Wynne Evans, who sings the “Go Compare” tune, inspired by Over There, in different places, from a coffee shop to a train station and, in this case, on a plane across the nation.